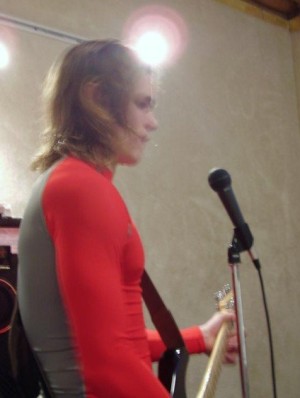 I play the guitar decently well, and have a whole list of instruments that I wish I could play better including piano, violin, harmonica, organ, and drums. But for what it's worth I am pretty good at the drums in the video game rockband.

One of my life goals is to be in a successful rock band. I formed my first band in seventh grade with my drummer/best friend Tyler, and have played in a bunch of bands since:

I moved to LA in hopes of making it big. My band had some minor success, but we also cycled through a lot of members and never really stabilized. The only constant members were myself and Daniel Nunez. Videos available.

Tyler and I got together again to record some old It Pok tracks in 2009.

In 2005 we reunited as a three-piece to form our most successful lineup.

After Dark Allusion's mild success, we regrouped to form the Orphans. Following a brief breakup (When Tyler and Alex associated with the seedy underbelly of the Huron OH music scene) and reunion we became the Zorphans. Our claims to fame were headlining a show at the Huron Conservation Club, playing the 2002 McCormick Middle School Halloween dance. For the record MMS still owes us $40 and two fans. Members: Josh Orndorff, Tyler Morehart, Alex Wyatt, Sarah Orndorff